It is official: The world’s greatest cycle race – the Tour de France – will start in the north of England on 5th & 6th July 2014 bringing millions of fans to the Yorkshire roadside to cheer on the champions of the sport.It will be the first time Le Tour has visited the north of England having previously only made visits to the south coast and the capital. Following two days in Yorkshire, the Tour will not forget the capital though as day three starts in the historic town of Cambridge and concludes with a return to The Mall for a royal arrival in front of Buckingham Palace.

Although the full details of the 2014 Tour have not yet been released, we at France Motorhome Hire are launching our Tour package now as we were fully booked for the 2013 Tour dates by the end of July 2012! 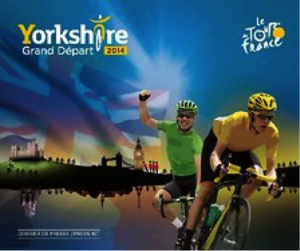 Whether you are planning to attend the Grand Depart in Yorkshire or meet the race for the official restart in France we have a carefully devised package to suit. In deference to our loyal and fanatical Tour followers new and old, we are reserving our entire fleet again for the Tour package in 2014.

The special 100th edition of Le Tour in 2013 caused motorhome and campervan bookings to flood in earlier than usual and made sure we filled up very quickly and whilst the 2014 Tour should be under a little less pressure, motorhomes in France will not be! 2014 commemorates 100 years since the start of The Great War and both France and Belgium are bracing for large numbers of summer visitors paying their respects to those who fought in the war. 2014 may not be the 100th Tour but if you want a motorhome or campervan to follow it, book it very soon indeed.

We are offering four options of differing duration and four types of vehicle for the 2014 Tour.
Having listened to client feedback over recent years, we know what makes a trip following The Tour successful and have devised a package specifically aimed at those who want to get as close to the action as possible.
Everyone has seen the iconic images of lines of motorhomes parked right alongside the road on every stage of the route and with careful planning it is possible to see a good many of the stages.

Our comprehensive Tour hire packages offer the option to include the Yorkshire start on Saturday 5th July or to commence by joining The Tour on the French side on 8th July and to either keep the vehicle for the anticipated Paris finish on Sunday 27th July or return it on Saturday 26th July before heading back to the capital to see the final day.

All hires start with pick up from our Montargis depot (an easy journey from Paris, trains depart hourly) and allow plenty of time to take possession of your vehicle, head to a supermarket for supplies then get to either the Yorkshire start or the restart in France.

Our young fleet of motorhomes and campervans are already equipped with everything you need for a successful motorhome trip and for the 2014 Tour, our package prices include the following essentials in addition to all the features and equipment usually found on our vehicles.

Needless to say if you want to bring your own bikes you are very welcome to.

Equally needless to say, if you want to follow The Tour route in a motorhome and ride some of the best stages of the 2014 route (on your bikes or ours), before or after the live Tour dates, we’d be happy to offer you this package too (at the applicable seasonal rate which will be lower in any month other than July and really low if you come between October and April).

Option One (The shortest Tour hire we offer):Pick up in the afternoon of Saturday 5th July – Drop off on the morning of Saturday 26th July.Exclude the UK leg (5th, 6th, 7th July) and head straight for the restart in France (location not yet confirmed but anticipated on the afternoon of 8th July). Returning on Saturday 26th July, before the anticipated finish in Paris on Sunday 27th July.

Option Two:Pick up in the afternoon of Saturday 5th July – Drop off on the morning of Monday 28th July.Exclude the UK leg (5th, 6th, 7th July) and head straight for the restart in France (location not yet confirmed but anticipated on the afternoon of 8th July). Returning on Monday 28th July, after the anticipated finish in Paris on Sunday 27th July.

Option Three:Pick up in the afternoon of Tuesday 2nd July – Drop off on the morning of Saturday 26th July.Include the UK leg (commencing 5th July in Harrogate). Returning on Saturday 26th July, before the anticipated finish in Paris on Sunday 27th July.

Option Four:Pick up in the afternoon of Tuesday 2nd July – Drop off on the morning of Monday 28th July.Include the UK leg (commencing 5th July in Harrogate). Returning on Monday 28th July, after the anticipated finish in Paris on Sunday 27th July.

Extensions are possible so if you would like to spend time in France or Europe before following The Tour, don’t hesitate to give us your dates and ask for a quotation. Extra days will charged at a much lower rate as they will fall outside of our high season period.

As the French restart or Paris finish have not yet been announced, we cannot provide advice on that part of The Tour yet but we will send out some further notes to anybody who has booked when more information is available. In the meantime, here are some useful links for the UK part of the trip (which is already official).

All about Yorkshire and Le Tour: letour.yorkshire.com

The offer only applies to new bookings made after 20th June 2013 and is made subject to the availability of vehicles to hire.

The offer is not available in conjunction with any discounted rate or other offer made by France Motorhome Hire/ SARL Direction France.

In order to allow for the fact that most bookings will be made well in advance of the final route being announced, the exact dates (and therefore package) offered could be subject to minor changes when the route is officially published.

Instead of the regular level of security deposit (€2000) a higher security deposit of €3000 will be charged for The Tour package (this sum is authorised but not debited from your card account and returned pending return of your hire vehicle in the condition in which you collected it.

France Motorhome Hire/SARL Direction France do not organise any part of the trip other than the hire of the vehicle and package of inclusions as stated in this offer. Route planning, campsite reservations and all other arrangements are to be made by the hirer.

We specialise in hire for visitors arriving from overseas so our vehicles are particularly well equipped and ready to use.

Unlike most hire companies in France, our prices include:

To book your 2014 Tour Package just send us an e-mail let us know which package you’d like and we will check availability and send you a booking link straight away: [email protected]
Like this blog? Share it with friends