Watercress… A superfood right on our doorstep! 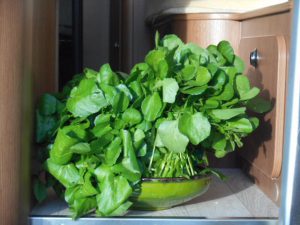 The “Cressonnière de Veron” (watercress farm) in our village has just opened its gates for the first time since the spring, and will remain open all winter.

Our depot is right in the middle of a village with all sorts of amenities, which means we are lucky enough to have a boulangerie (bakery), épicerie (grocery shop), coiffeur (hairdresser), bar and our very own cressonnière (we bet no other campervan hire company can make this claim)! Owned by the Bazus family, you can see some great photos here of them working hard on their 70-year-old watercress farm.

If you are picking up a campervan between now and the spring, don’t forget to call in at the Cressonnière de Veron and pick up some unbelievably fresh watercress. Watercress is a so called “Superfood” containing more than 15 essential vitamins and minerals – more iron than spinach, more calcium than milk, more vitamin C than oranges and hardly any calories.  It’s fabulous with most French blue cheeses in salads but also makes a great soup or sauce and will add a fresh, peppery flavour to all kinds of sandwiches.

How to make tasty watercress soup 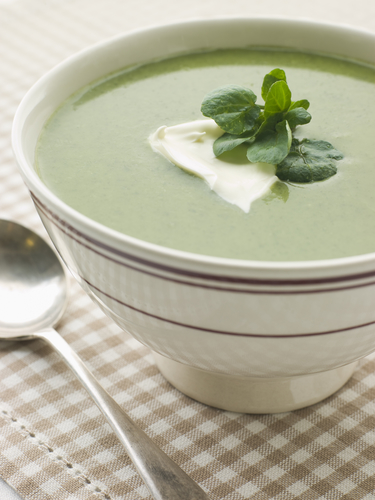 There are many takes on this classic soup from omitting potatoes, to exchanging leeks for onions, using stock, not using stock, adding nutmeg and lemon juice…I think this one is delicious!

Heat the oil in a large pan, add the onion and sauté over a medium heat for 5 mins until the onions are pale golden. Stir in the potato and stock and bring to the boil. Cover and simmer for 10 mins or until the potato is tender.

Stir in the watercress, cover and cook for a further 5 mins or until the watercress is wilted. Blend the soup in the pan using a handheld blender until smooth. Stir in the milk, cream/crème fraîche and seasoning to taste. Gently reheat until hot and serve with warm, crusty baguette.